Developers complain that their game doesn't sell in the app store or doesn't have enough downloads and thus doesn't make enough revenue through their in app purchases.

There are problems getting visibility on the app store, its key to success. However the main problem I see isn't visibility - its boredom of the users looking at your app.

Let me give you one example: I am looking for good strategy games in my iPad and iPhone since months and can't find a lot. Most so called strategy games are Tower Defense games or variations of games already in the app store since years. There are exceptions like Autumn Dynasty or Ravenmark. But most other strategy titles can be put into 3 or 4 drawers or "me too" or clones of existing concepts. Boring.

The same is happening on many other genres. It seems that developers look whats selling and copy that concept - and then complain their game isn't selling. How lame is that. I can understand that licensed IP's for movies like Despicable Me simply copy a game concept (runners) and be good with it - but long term revenue is not happening on game types which exist in the app store since years.

Developer friends told me they are tired of the App Store. Its not as exiting as it used to be. But that's exactly whats happening. 90% of all games being published already exist.

So the first step for success on the iOS store is to make a big step away to all mass concepts like runners, tower defenses and match three games. 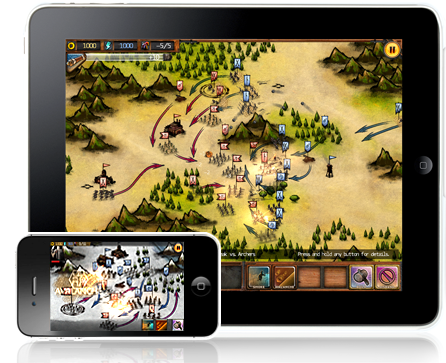