Largest player battle ever in Eve Online - I was there

So in case your games site hasn't told you yet: Yesterday on July 28th the largest player battle happened in Eve Online with over 4000 players participating.

We won. Our enemy, the TEST alliance, retreated to Delve, another area of the universe. Their retreat basically give us the region "Fountain" under control.

If you ask how it feels to be there let me explain: if you haven't done this kind of mass battle yet you will get frustrated, annoyed even. The reason is that the only way CCP can run such a battle is to slow down time. They call it TiDi which makes all actions slower than real time. In our case TiDi was so bad that all actions took 10x longer than normal. That doesn't sound much but imagine targeting a ship takes 3 minutes ... and shooting it up to 10 minutes. The whole game runs in slow motion in this one sector.

The advantage of such a TiDi is that the game doesn't lag or crash, it only slows down. If you are used to it and learn to cope with it its actually fun. I finished GoT season three while fighting in it. Yes that's how much time you have.

You might argue that this isn't fun but you need to know that Eve is not an action game, everything in Eve is slow so slowing it down even further to fight crash lags is no problem at all. Many players complain about it who never fought in these battles, but they work and you must work them because otherwise you can never defend against .... 3000 players invading your system you worked years for.

There will be a time when server architects know how to run 4000 players in one "arena". But so far there are still physical limits to overcome and Eve sets a record here.

Now that the news is spreading even the BBC covers it: http://www.bbc.co.uk/news/technology-23489293 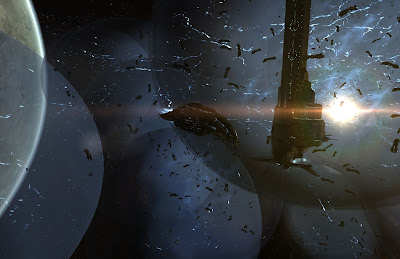