In transition years there is no limit on bad opinions

The industry is in chaos, no one knows where it goes, everyone speculates and meanwhile the smartphone and tablet market opens up an entirely new segment.

Yes, your PC is faster than the next gen. Is it? Its not, simply as the number nerds forgot that on the next gen you can access the hardware directly, on the PC you can't. The layers of software between the games and the hardware is so thick to be compatible with 30 years old history that it slows down your games.

On next gen that is not the case. Ask yourself why most XBox 360 titles still look better than the most recent PC titles. That's why.

My favourite of the week is however this one: http://www.gameinformer.com/b/news/archive/2013/05/30/take-two-ceo-talks-mmos-next-gen-gta-v-and-zombies.aspx

Oh boy. MMO's don't work in USA. Thats what he said. Thats why he partners with TenCent for Asia, that's it. No MMO works in USA. I had to read that twice.

He also focusses in Asia on MMO's where 10-20 are successful. What a wrong numbers game. Does he know that in Asia they release like a new MMO per week?

But it gets better!

He believes the rental problem on console games only exists in the first 8 weeks of new games. Really. Did he ever visit a games rental store?

June 10th will be remembered as the day which changed our (games) industry. June 10th is the day where the key press conference are on E3. Big announcements will be made by Sony and Microsoft for their new consoles.

Apple makes another keynote on June 10th as well. Deliberately placed to compete with the important gaming conference. Readers take note. I warned you.

Mobile is eating the world

What I said on Quo Vadis but in better slides: 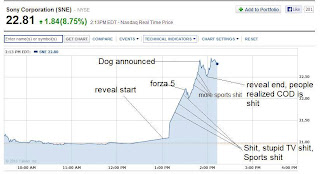 XBox One Big Brother is watching you

Many things have been said about the epic fail of Microsoft's presentation of their XBox One (and the bad name), but this here basically cuts my interest to buy one in half:

Yes, this is really a plan. Do you really want Microsoft watching your living room. Really?

What bothers me in most computer games

Yesterday I answered an interview of the magazine Spiegel about Eve Online and one of the questions was "What do find so fascinating about Eve?"

When I answered I realized what the single thing is what bothers me on most games to date: they tell me what to do and how to do it. The freedom is so limited that you feel like a game on rails. Worst invention of the industry in this regard: QTE. Yes I mean you Call of Duty.

The one single player game I played recently for longer was Dishonored. I could pick up my mission when I wanted, still could roam around my base afterwards and went to the boat which dropped me in the mission area. Even there I could approach my goal as I wanted, there was no timer, path or QTE telling me how to do it. I love that game.

In MMO's its similar: World of Warcraft has a path of success. You level up, then you do your attunement quests (old times), then you did 5 man heroics until you get bored and finally you raid and progress until you beat the end boss of the current expansion and have the ultimate gear ... until the next expansion made it worthless. What a waste of time? What a way to be masochistic?

In Eve Online you are a pilot of a space ship. So there. Thats it. What do you do? Well what do you WANT to do? Simply do it. Pirate? Diplomat? Spy? Trader? Logistics? Flying missions? Troll? Scammer? Being part of large scale war? Explore the universe for alien artifacts?

And here is the problem why those "sandbox" games aren't as big as World of Warcraft: in order to enjoy the scope for the game you have to know what you want, you need to motivate yourself. And exactly here most players fail: they want to be entertained but not work for it. They are lazy.

And game developers are lazy too. Because producing a game on rails is easier than creating a sandbox. Otherwise we would see more of them as they are very successful even as single player games. 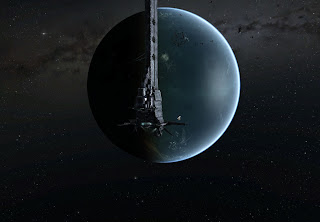 With each transition year the same discussions appear generation after generation - and I can't really hear it anymore: Nintendo is in deep shit and should stop making consoles - instead they should release their core IP's like Mario & Zelda on all other platforms.

This is the worst decision they could make. The sole existence of that argument proves that Nintendo should not do it: if you want to play their great games then buy their hardware.

And Nintendo still builds the best console hardware. Microsofts XBox is louder than a vacuum cleaner and red circles all the time. The PS3 is huge, can't be stacked and its only advantage is the Blue Ray.

Nintendo has one weakness they need to learn fast: online. That's where Sony and their PS4 learned very fast - the XBox paved the way but Microsoft screwed it up.

Let's see what may 21st will bring when Microsoft spills their beans.

Only one ting is clear: Nintendo, being 125+ years old, having a market cap others are envious about - has patience like an elephant. If this generation isn't theirs then it might be the next.

Every time there is a question hanging in the air people call for A/B tests to find out the right solution. Isn't that a bit lazy? You don't have the time to test out everything with A/B tests, considering they aren't as easy to do as you think.

My answer is always do what best practice is from successful online games. So you simply take a bunch of them and look how they do it. Most of the long running ones have tested the hell out of their systems, so why don't you take their lesson and simply steal their key findings? They have it right there for you, online, in their game.

So there was a question recently if its better to sort your premium currency packages low to high or high to low. The answer is now really obvious if you follow my advice. You don't need to run an A/B test to find out.

You can learn so much by looking at good f2p games and what they do. Some of them even have fan made statistic sites which you can use how successful they are in various countries, popular items or vehicles. Simply look for them.

So open your eyes. All knowledge is right there in front of you, a simple search away.

Mobile is not worth it (NOT!)

I will remind Bobby about this in 5 years when he regets this:

No its not. Even with 5m, heck even with 2m subscribers its an awesome business case. And even in 5 years, no 10 years we still can play WoW. Wanna bet?


Simply because until today no successful MMO has been shut down. You still can play Ultima Online or even Tibia if you want, both like 15 years old?

EA posted its financial earnings and it disappoints. Without their cash of 1.6b in the bank they would be gone by now. "Don't expect growth on the giants EA and Activision" they say. Ok, so why do others grow like hell. And some new mobile companies have a market cap of 9 billion. Wtf.

Those are all signs of disruption. Its happening and quick. The old games market will change dramatically in the next 2-3 years, so don't moan if your favorite FPS is no longer the #1 topic on the web sites.

Then EA announced they bought the Star Wars license. Oh my. Thanks no, I see what you did to Harry Potter. And fail, major fail: the license excludes online, social and mobile platforms. That deal is like an ancient relic. Fire the guy who did it.

But then its all about small 90 men companies doing more money than the old economy.

So when are you joining? 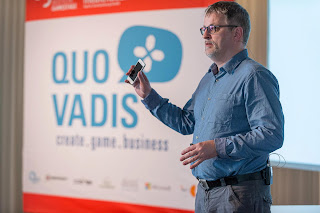 LoL is not a good role model for f2p

League of Legends, or LoL for short, is often mentioned as a successful f2p game you should learn from. Fact is that LoL is one of the largest MMO's to date. Of course it makes tons of money for Riot and their owner Tencent.

So why am I hesitent to use LoL as a role model for good f2p models? The reaon is simple: their monetization system is very very specific and only works due to their reach.

Their active users is phenomenal high (42 million MAU as of this writing) and this multiplies the revenue formula to the skies.

But their conversion is low, i.e. how many players actively pay. That is my biggest critic. If you use LoL as a role model you might end up with a low conversion and if you fail to get the reach your game fails badly. That's a huge risk. A game can survive with an average reach and a good conversion easily, but rarely the other way around.

Note that the ARPPU is somewhat dependent on the conversion. If your conversion is low your ARPPU can be unusually high and vice versa.