I have been at Quo Vadis Developer conference in Berlin and it was a blast. I did my "The Damned App Store" talk which I will repeat at Casual Connect Asia in May - just in case you want to see it. Singapore is awesome, come visit! I will also be part on a panel which talks about "Asian game mechanics and the West".

The video of my talk will be online sometime after Casual Connect, so be patient.

Next directly after CC Asia are the German Developer Days in Frankfurt which we are attending.

And then finally a pause ... preparing my move here to Berlin during Summer. Maybe Scott Foe forces me to come to Casual Connect USA, we'll see. 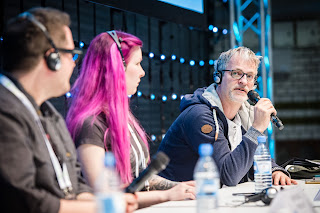 So many developers think Mobile development is so easy. Reason being that many games are smallish casual games. But here is the thing:

Nah. Let a friend explain it much better, thank you Seppo for this summary on Facebook:

April 8 at 8:20am · Oakland, CA, United States ·
Dear fellow game devs, those of you who work on console/AAA games: You may think mobile is trivial compared to what you're doing. And in some ways you're right.In some ways you're very, very wrong.
It's a different set of problems. But to do a mobile game-as-a-service, at scale, keeping them successful for multiple years, is *significantly* more complex than most linear console games.
Graphically probably a lot less intense in most cases (though not all).
Logically probably a little bit simpler as well, depending on the game (*in general*, there are significant exceptions).
Design-wise? Same or harder, because of the need to design in growth, evolution of the mechanics over significant time periods, and factor in most of the business/monetization in fairly direct ways.
Management/production-wise? *Significantly* harder. Rallying a bunch of people to a ship date is intense, and extremely difficult - to the point where basically no one in AAA gets it even marginally correct. But shipping new content on a weekly basis, ensuring 99.99% uptime, balancing stuff to not break the game overall even after years of updates? You're taking on the risk of shipping live content every week. The difficulty of that vs. shipping once at the end isn't comparable. It's a totally different problem but it's just as hard *or harder*.
So, I'm not saying Mobile >> console/AAA. But I'm saying that if you don't appreciate the complexity and difficulty of shipping a game that's successful and lasts multiple years, that's because you're not aware of what goes into it. Dismiss it at your peril. This is a skillset you will almost certainly have to learn in the next decade, and if you think it's easy, you'll be dead.
Posted by Teut at 4:45:00 PM