The Story of "The great Giana Sisters"

As loyal readers of my blog know I joined Rainbow Arts in 1987 because they wanted me to recruit new projects (at this time it was Sarcophaser and Katakis Amiga). I also took over as development director meaning that I was in control of all development, quite a challenge for someone who never did this.

Remember though that at that time there was no best practice or experience to base this job upon. So that time was basically my education: I was allowed to do everything wrong and learn from it, we all did. We were three people leading the company now: Marc Ullrich, founder and Ceo, Bernard Morell in control of production (physical goods) and distribution, and me in charge of game development. I will get back to that trio soon in another blog post.

At the time I joined Giana Sisters was already in full production with Thomas Hertzler as programmer and Manfred Trenz as graphic artist (yes the same Manfred who did Katakis & Turrican on C64 later on). The project had like 3 more months to go, at maximum. The only thing I did was QA & Mastering, which was trivial at that time.

(Note: as Hans Ippisch noted the C64 original was created by Armin Gessert as programmer and Manfred Trenz as artist, the Amiga graphic conversions were done by Lothar I think, see below)

However I screwed up someplace else. There were magazines excited about the game as at that time you did pre-advertising for titles months ahead of launch as otherwise you could not sell into retail or get customers into the shop. Based on those ads we got requests for interviews, previews etc, which basically means the writers visited our studio and did their thing. Remember, no internet, no Skype, no mobile phones, only landlines and travel manually to get screenshots (no digital ones at that time either, they made photos of the monitors).

So ASM, a popular German games magazine but a little on the "yellow press side" interviewed me, which went well. Off the record we spoke a bit about the project and I told them how big of a fan Manfred and Thomas are of Mario Brothers on Nintendo NES. The writer asked "So basically Giana Sisters is a clone of Mario then". "Yeah" I said, "but. ..." it was too late, the writer had his tag line without telling me.

Great. I learned for a lifetime not to trust ANY writer in the gaming industry. So we put legal in charge and forced the magazine to stop the printing presses, destroy the issue and reprint. Yes we did that.

It was the first issue of ASM not appearing on time.

Giana Sisters was released on C64, C128, Amstrad, Spectrum, Amiga and Atari ST and was a smashing hit, the fastest selling game Rainbow Arts ever saw. The British distributor (a British company called US Gold) booked ads with a huge screenshot and the tagline "Giana Sisters - moving over Brothers". It created a huge hype and .... caught the attention from Nintendo. Until then they ignored that little game on the little home computer because it didn't harm them, but now the ads attacked their holy grail: the Mario IP.

It took just a few days until an armada (really, like 6 or 7) of lawyers in black suits, suitcases and tie went into our offices and shut the sales down, permanently, worldwide. We never had a chance. Nintendo hired like the best of the best.


It had long term consequences as well which we didn't anticipated: Nintendo, being a Japanese company, has a brain of an elephant. They never forget. So when the console market exploded and riches were found on the SNES market Rainbow Arts always was denied to publish games on Nintendo platforms. Only years later they could do this. Once a thief, always a thief. 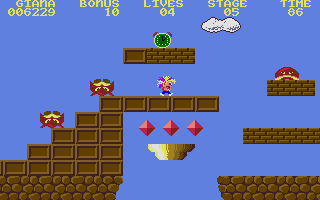 Giana Sisters was re-released on iOS and Steam just recently and a new version was done by Spellbound, the company of the deceased Armin Gessert, the guy who did the spiritual successor of Giana Sisters "Hard'n Heavy" later on. Please note that the company Reline on the cover an dcredits was owned by Rainbow Arts and they used the label in fear Nintendo would notice. For the same reason Armin never wanted to be in the credits of the game :(

Thomas Hertzler left Rainbow Arts after Giana Sisters and founded blue Byte, the company behind The Settlers, Battle Isle and more. The company was then bought by Ubisoft in 2001 which has released Settlers Online in 2010, the game I have been working on.

That's how small the world still is in the gaming industry.