The story of "Citadel of the Black Sun"

There was a game - if it would have been finished I would be famous - and rich. Here is the story of 1988.

There was a team called Golden Goblins back in Gütersloh who worked for us. Gütersloh is a village roleplaying a city. It is only famous because two large companies are there: Bertelsmann and Miele, otherwise its like a village. Restaurants close after 2pm until the evening, so no food during that time. Awesome!

Rainbow Arts was founded there along with Magic Bytes, two of the first companies in Germany in the game business. Rainbow Arts moved to Düsseldorf but the team stayed in Gütersloh working on a title called Grand Monster Slam. 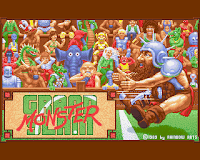 This title is important later on for M.U.D.S., but that's a different story. Important is the artist, designer, creative multi-talented Hartwig Niedergassel, who worked on it with his specific style.

Remember also that Rainbow Arts distributed a lot of US companies in Germany as we somehow "invented" localisation, no one was doing it at that time. One of the companies we did was SSI, known for their AD&D RPG's "Gold Box Series" like Pool of Radiance. We had a good relationship and at some point they asked us if we could develop a title for them.

So I started prototyping with Hartwig and Heiko Schröder, a technical programmer (with whom I later founded my own company Wings Simulations). The game was PC only, the first title ever Rainbow Arts did only on PC specifically for the US (as Europe was dominated by Amiga/Atari ST).

The RPG's SSI did were top down but with some nice features: party, not single character like Ultima and turn based group combat. We wanted that but move forward with graphics. Back in that time (remember, year 1988) we needed to support 16 color EGA and 16 color VGA. Yes, sixteen. That's 16 ugly colors with two being black and white. The screenshots you'll see will show this. Hartwig was really an artist to get out those great graphics from those colors.

The special things I put into the RPG we wanted to create were unique and not known at that time:

Barby Doll System: I wanted to change the appearance of the characters depending on their armor and weapons they equipped (yes at that time everyone used static pictures). We talk 1988/89 after all: 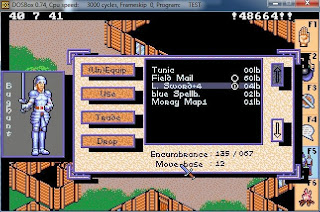 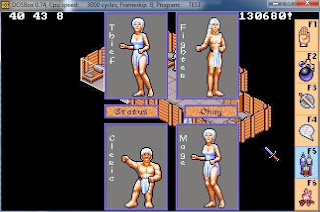 Isometric Graphics: Most RPG's were top down due to technical reasons (remember no 3d, that came in 1996) but I knew it was possible to trick this as I wanted the system what Knights Lore did on Spectrum: full isometric view:

Line of Sight: But I wanted more: I wanted that you can enter all houses and only look inside if you had line of sight. So the inside of houses should be dark unless you peeked though a window or opened a door. Tactical war-games did this already, but in top down 2D.

Heiko made all this possible, he was very good at this stuff. So our game looked like this on the tactical screens or when you entered villages or dungeons: compare this to other RPG's of 1988/1989!


Note the black areas where you didn't have line of sight. Also we supported multiple stories of buildings, so you can walk up and down, or even jump out of the window from the 2nd story. The cows also were important: I believe we were the first game to include cow tipping :)

The right side was the function bar, we reduced all functions to a nice menu usable with the mouse. Oh, did I tell you full optional mouse control? That was unique as at that time most PC's didn't have a mouse as windows shipped much later. Most games were keyboard control only.

We also had nice graphics when changing locations. At that time you usually walked on a world map and only showed above detail when you enter locations. Remember 16 colors!

When we showed this game to SSI they were blown away. They immediately wanted it and put it under the AD&D license. We, a small German team, allowed to use the AD&D license AND work for SSI, a great US publisher. Wow, that was unique, a first for Germany. We loved it!

And it even became better: our producer at SSI Nicholas Beliaeff told us that SSI planned to change all their future RPG's to our engine if we finish. All. All AD&D RPG's with our engine. We would be famous!
But the world had different ideas with us.

First one employee of our daughter companies we acquired called Time Warp moved into our offices as we closed down their offices. That guy wanted my job, always working to criticize mine. He said openly he wanted my job he can do it better, and he hated RPG's. He didn't believe in them.

Second I fell in love with the girl friend of my best friend Bernard. Remember? He was one of the three of us managing Rainbow Arts. She and I came together and she split from Bernard, not good when you think the three of us had to work together on a daily basis.

Story short: I left the company due to private reasons (due to my girl friend, later my wife, we married in 1992, but she died on cancer in 2010) and that one guy took over all my projects.

Within three months he split the development team, made sure SSI hated my and the teams guts and the project was cancelled. Remember, he hated RPG's! The game was 70% finished. I can play through the alpha even today which I still have on my machine (I took the screens above from it). All it took is someone to finish the last steps.
But he cancelled it. Made sure SSI's wrath was on me and not him. What an asshole (name changed).

There it goes, a chance in a life time to write computer games history. One of the greatest games I ever did wasted due to an asshole, but I gained a wife in exchange for this and losing a best friend.

But thats not the only time fate destroyed one of such potential projects. I'll write about the other one soon.

Side stories: our first producer at SSI Todd Porter was such a fan of our game that when he left SSI for Origin he put many ideas and concepts from us into their game Knights of Legends.

The "asshole" from above continued being one: he joined a company which invented advertising games, stole their co-ceo and the companies customers and copied that companies business. Weeks later even that co-ceo was fired. The asshole is still CEO of that company and publishes games. And no, even today after all those years I won't accept your Facebook friend request if you read this.

Hartwig Niedergassel continued his great work with MUDS, my largest project at that time. Story to follow.

Heiko Schröder founded Wings Simulations with me in 1996 and was lead programmer on Panzer Elite and Söldner. He now works for Volkswagen as a programmer near Hannover.

Nicholas Beliaeff meanwhile after a great career is Vice President Development of Trion, the publisher of Rift. We are still frends and see each other on international game conferences about once a year - since 25 years!