The Story of Apprentice on Amiga

End of the 80's my ceo Marc Ullrich called me into his office and introduced me to an artist. Marc said this guy owed us money but has none, but he want to compensate us with graphics he did. So here I got a stack of 3.5" discs full of graphics and the order "Make a game out of it, but make it cheap".

I forgot the name of the artist but I assembled a small team of one programmer and one artist to edit them. As the graphics where modular in 16x16 tiles and some neat enemies I decided to go with a platformer as at that time we didn't have one.

The graphics also contained crates which I used as the main element: you should be able to push and pull them, stack them, basically redesign the whole level with them. This element I took from Spherical, another game I did in 1987.

So Axel Hellwig the programmer made it possible to change the levels via crates while Thorsten Rappe edited the graphics to make them usable in the level editor. The production went good, although I need to apologize to Axel now as I had like 15+ projects on my desk besides being designer and producer of Apprentice plus Axel had really bad teeth and bad breath at that time - making it difficult to talk to him for a long time. Now of course he has changed, is married and all, but hey, at that time none of us looked after himself.

As the production had to be cheap we looked for cover art and checked our standard artist Celal Kandemiroglu for it: he promptly did one for a low fee - but it was butt ugly. I think its the worst cover he ever did. Note that Celal made nearly all 8/16bit covers of Germany at that time and made quite some impression.

Here is the ugly Cover: 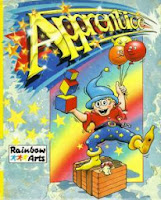 So ready we were, no QA time as we did that ourselves, remember we had to make it cheap ... and shipped. It was a good success, no hit, but solid. But ... it is one of those games where I still get fan mail today.
I have someone on FB who called himself "Mark Apprentice Schneider" (name changed). Fanpages do exist as well: http://www.amiga-apprentice.de/index.html

Here is a video with the great music of Chris Hülsbeck himself:


And its mentioned in many podcasts of the 80's as well and is on Mobygames of course. This is one of the games which still gets a lot of attention, I will write about the other ones soon.

I forgot the small print:
I have no idea what Axel or Thorsten do these days, but Celal is back in Türkey still doing great graphics an dchris Hülsbeckenjoys the retro fame and still lives in Marin County, California.
Posted by Teut at 11:37:00 AM